Adoption in India is still a taboo subject that couples often resort to if they cannot have a child biologically. As much as we would like to believe that we live in an educated and progressive society, sadly this is the glaring truth that cannot be ignored.

The new Vicks ad titled #TouchOfCare is a heart-warming ad based on the true story of Gauri Sawant, a transgender and an activist, who adopts orphaned Gayatri and fights the social stigma to raise her as her own child. The video touches two key social issues in India – adoption and transgender rights.

END_OF_DOCUMENT_TOKEN_TO_BE_REPLACED

As a family we are ardent travel enthusiasts. In our 6 years stay in Europe, we have traveled to 29 countries within the continent and aspire to cover the remaining as well.

This Easter vacation, we packed our bags and headed over to Romania, a country that is still haunted by stories of a vampire count and the legend of a pompous and self-absorbing dictator.

END_OF_DOCUMENT_TOKEN_TO_BE_REPLACED

It is funny how a #like can cheer you up and make you smile when nothing else can’t.

Don’t be shy. Fill in your details to get in touch with me.

#Dear Daddy is a moving video created by Care Norway, the Norwegian branch of charity Care International that will shake you from within. It highlights how casual sexist jokes, remarks and name-calling by men contributes exponentially to the culture of violence against women.

This video is a call out to all dads and would-be dads to address disrespectful behaviour towards women by their children and peers.

According to the World Health Organisation, it is estimated that 1 in 3 women worldwide experience physical or sexual violence in their lifetime and this is what is highlighted in this video.

The five-minute film is a powerful narration by an unborn daughter to her daddy about the harsh realities of life that she would be facing when she grows up. From the so-called ‘harmless cat-calls’ to ‘sexual innuendos’ to ‘rape’ and ‘domestic violence’, the video lists all the possible and horrific things that women endure throughout their lifetime at the hands of men.

The video calls out to all men around the world to bring in a systemic change and nip misogynist culture in the bud. And that change should start with not accepting any kind of abuse towards women, whether physical or verbal or just an assuming “joke” with friends.

Iceland, one of those places that had been pending on our bucket list since long. The volcanic terrain jagged with huge boulders, proof of Mother Earth’s fury spit on the surface, had been alluring us for sometime now. A formidable land that reminded mankind of nature’s might; an apocalypse ready to strike without a moment’s notice.

Our stay in Europe could have never been completed without a trip to this majestic land; the land of Fire and Ice. So this winter we decided to finally set out on our adventure trip to this mysterious land which is rife with a rich heritage of culture, mysteries and of course nature’s marvels.

When we landed in Reykjavik, it was almost evening. It had been raining the whole day and we could still see the thin receding grey line in the horizon over the Atlantic Ocean.

The landscapes in Iceland are rather eerie and otherworldly and offer the perfect conditions for adventure. Summer landscapes are strikingly different from the winter land. 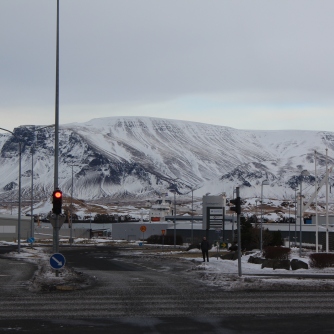 The uncanny landscape had a high degree of quirkiness in it. Majestic mountains rising up like the phoenix, boiling water bubbling just beneath the surface, steam gushing out suddenly into the numbing Artic air, miles upon miles of blackened lava fields donning a white coat of snow, and the gaping fault line dividing the American and Eurasian tectonic plates presenting proof of the highly volatile ground we stood upon.

Iceland is blessed with the wonders of nature and one such wonder are the ‘hot springs’ that dot the landscape, aplenty. Tapping the water of the hot springs, and supplying it to the city is the job of the glass dome, sitting high on top of a mountain, and is called ‘Perlan’. ‘Perlan’ or the ‘The Pearl’ is the nerve center of the entire hot water supply chain for the city of Reykjavik. The taste of the water is rife with the smell of Sulpher, as it is sourced directly from the hot springs and is particularly inconvenient to drink as the pungent smell lingers predominantly in the periphery. But if you can get used to the smell, then nothing is more pure, natural and healthy than this ‘Hot’ water.

View of Reykjavík from ‘The Perlan’ 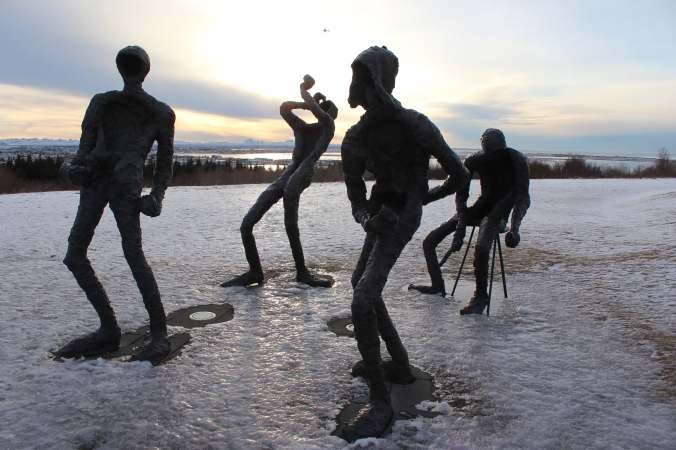 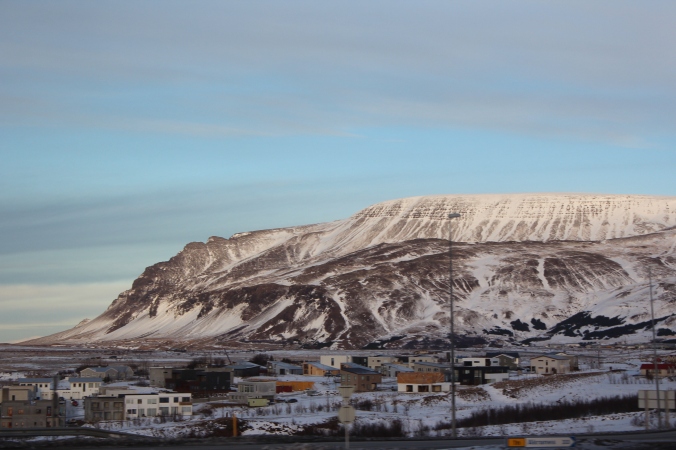 The ‘Orca’ was one of the must-sees in our trip apart from the ‘Northern Lights’, Geysirs and the Tectonic Plates. The ‘Orca’ or the killer whale is the largest member of the Dolphin family and Iceland is supposedly the best place to spot one. But unfortunately, like the Puffins, the ‘Orcas’ are difficult to find in the harsh Icelandic winters.

With our hopes of spotting the ‘Orcas’ and the ‘Puffins’ dashed, we set out the next day to see the other Icelandic must-sees. Our first stop was the ‘þingvellir National Park’. The National Park is one among the many UNESCO’s world heritage sites. An excellent spot to see the two tectonic plates. It is an active volcanic area and the best defined feature of the National Park is the rift valley, that is continuously drifting apart as a result of the incessant volcanic eruptions underground.

Our tour guide was pretty nostalgic when she was talking about the drifting of the rift valley. As a child she was petrified that one day Iceland might be divided into two parts and the ocean might take over the rift valley. But slowly, as age got the better of her, she realized that it would never happen. The incessant volcanic eruptions underground will keep throwing out the lava, which will eventually solidify, creating more land mass and bridging the gap. 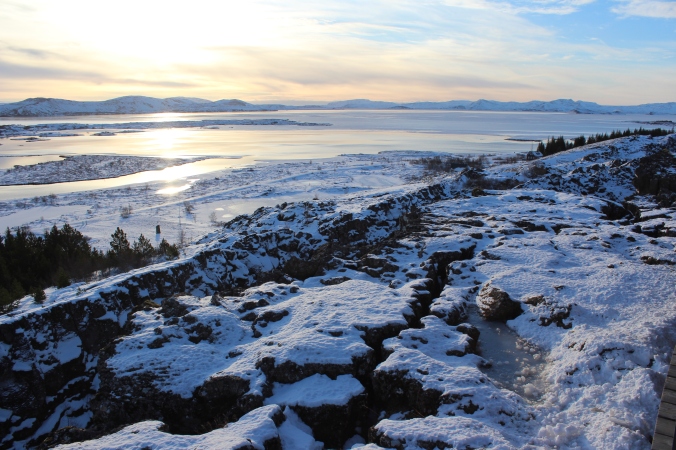 Iceland is the most sparsely populated country in Europe. And hence suited to those who love to relish life in the realms of nature and fancy the sense of isolation. 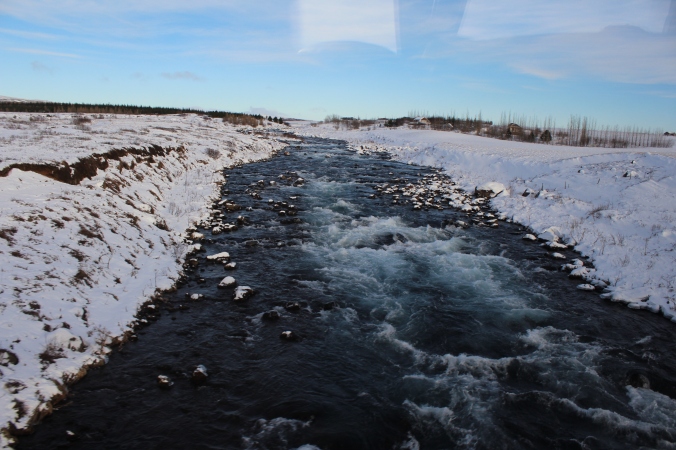 Our next stop was Geysir, the mother of all hot springs, where the champion boiling water fountain is called Strokkur. It is a 30 meters high hot spring that unleashes every 8 minutes. Plenty of American, Chinese and Japanese tourists flocked to see this nature’s marvel. As the ‘gammel’ Geysir gurgled and spit, we managed to click some amazing pics.

One cannot move around the unforgiving, craggy Icelandic terrain without one of these monstrous wagons. 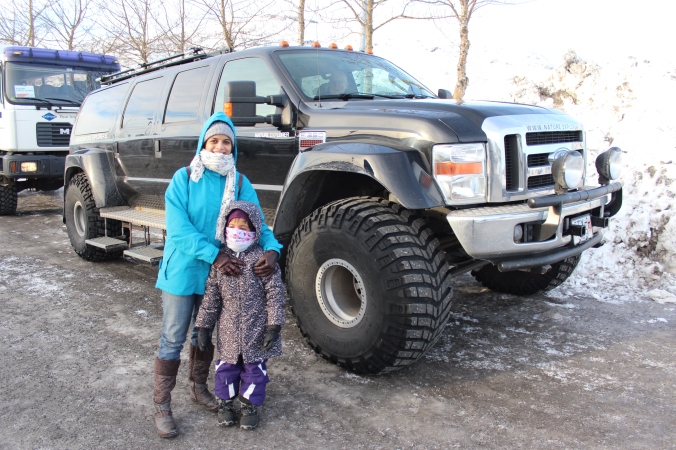 Our last stop of the tour was the Gulfoss WaterFall. It is the confluence of a number of waterfalls that merge together to form a magnanimous waterfall with deafening noise. It was a perilious 50m walk from the bus to the rimmed edge with the icy Artic gusts blowing at 80-90 kmph. The snow had settled down and the continuous thronging of tourists had made the ground extremely slippery, and almost dangerous. 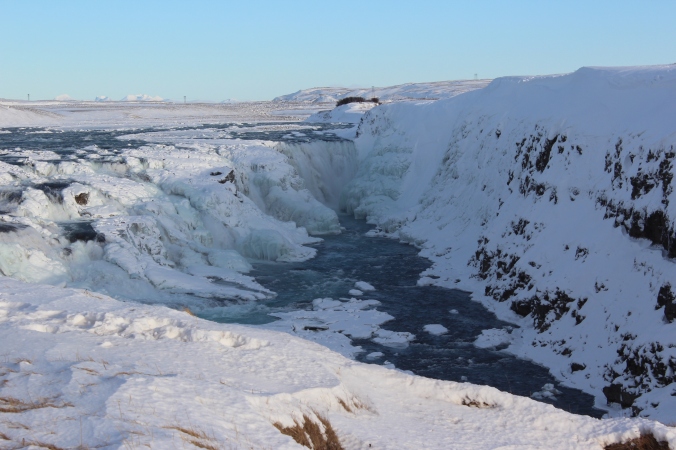 The view from the rimmed edge, with the land plummeting dangerously beneath, it is rather intimidating to stand at the edge, brave the icy winds and click some good photographs. But in Iceland you cannot go wrong and every picture will ultimately turn out to be a masterpiece.

We finally ended the tour witnessing a glorious sunset behind the volcanic mountains and head for another tour to catch the elusive ‘Northern Lights’. 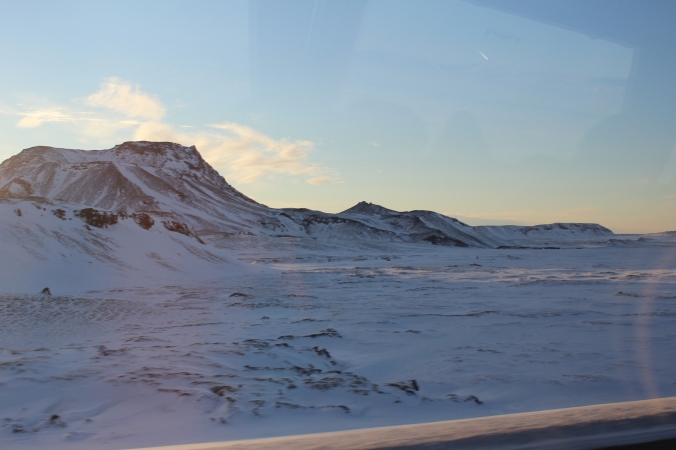 The last two nights had been good and people had witnessed a lot of ‘activity’. The tour guide was very optimistic and told us that the probability of seeing very good ‘activity’ is at the highest. Our spirits were touching the skies just like the probability figures. But everything will turn out to be just the way we want it to be is like wishful thinking. Hence, in spite of all odds in our favor, and waiting for 5 hours, we failed to get a clear view of the ‘Dancing Lights’ and came back home feeling miserable and wretched as ever.

But nonetheless the unfathomable charms of Iceland are too tempting and we will be going back again in the summer months to see what we couldn’t in the last trip.

I am an IndiBlogger