Is your child messy? One that loves decorating the house floor with her toys! Well then children love to be messy; the more the choices on the floor the more their desire to experiment and explore. However, as a parent when I walk into my daughter’s bedroom and scream in pain as the little Lego element pierces into the sole of my foot isn’t the best of experience I would say. As I hold my foot and balter around the room momentarily, my little one watches the show feeling amused and rolling on the floor with hysterical laughter.

So what can we do to make our little ones more organised when they don’t even know what the word means.

Five year old Surbhi was a great story teller. Her parents, Nitya and Devesh were proud of their daughter’s story telling skill. They would often tell their friends and family about her talent, sometimes adding little bits and pieces here and there. A bit of harmless bragging won’t harm, will it; they thought, rather it carves out a much better picture of their daughter and her talent.

As children genetically are Surbhi picked up the hints left by her parents and mastered the art. It wasn’t long enough when apart from mastering the art of story-telling, Surbhi inadvertently picked up the habit of lying. For her it was just another form of story-telling. At her age she was ignorant of the consequences that her benign story might bring; a story that was just a figment of her innocuous brain.

Surbhi would imagine she was having pony princess parties, dress them up and would weave stories around them. She was excellent in making up stories around simple things. During her primary schooling, she would often come home with little Lego figurines from her school. When Nitya asked her why she was bringing home school toys, then she would say that the teachers have asked her to take them home. She would cite tall tales on how good and well behaved she was at school and how impressed her class teacher was with her that she gave the little Legos to her and told her that she was being rewarded for her good behaviour. The unsuspecting Nitya would hardly read between the lines and would in turn be proud of her little princess. However, after some days Surbhi refused to go to school anymore because it seems the ever appreciating teachers had suddenly turned villains. According to her they would scold her for no reason and also would tell her that she was a badly behaved girl. Yet everyday Nitya would find the Lego figurines in Surbhi’s pockets only to be told that now her friends have started giving her the toys.

It was only on one of the PTM’s that Nitya discovered her daughter’s habit of lying. That day Nitya and Devesh sat down to have a long chat with their daughter.

Young children like Surbhi spinning stories around unsuspecting and simple things don’t come as a surprise for us. In fact manipulating the truth for personal gains is viewed as a ‘developmental milestone, much like learning to get dressed by yourself or to take turns.’ Some studies have shown that bright kids who are able to pick up the nugatory and trivial data from their everyday life and spin phenomenal stories around them pick up the skill from a very early age, as early as 2-3 years. For older kids of age 4 and 5, the game is on big time and slowly they start mastering the art. Fortunately, just because your young child is a frequent fabler doesn’t mean that she’ll grow up to be a big, fat liar. However, as parents it is our job to identify the problem early and nip this bad habit before it becomes ingrained. Freaking out and screaming at your kid or punishing her won’t discourage her; in fact she may simply become a better liar to avoid getting caught the next time.

Before the spin begins:

When There’s a Whopper in the Works:

You walk into your house after a bad day at work and find an elaborate drawing, made in permanent marker, on your bedroom wall. Uh-oh! The culprit knows she has invited trouble big time. Can’t you just see her little brain toiling extra time to come up with a way to wriggle out of situation? Even if you sense a con job coming, it’s not too late to help her come clean.

“And The Award Goes to…”

A familiar phrase heard a number of times when we skim through the TV channels broadcasting the awards ceremonies for different categories of films and television shows. And it is not very often until one is himself/herself a movie star or a relative to a superstar that an ordinary person like myself get to attend these award shows. But I was lucky to attend one such show; I was lucky to walk the red carpet. If you are wondering which one then let me wade away the cloud of disbelief; it was the show of not the stars but the budding stars in different categories hosted by the International School of Billund; the super-stars of tomorrow.

As I made way into the dimly lit auditorium, I was greeted by a massive screen which said “1st ISB Movie Premiere”. Wow that was indeed inviting and exciting. 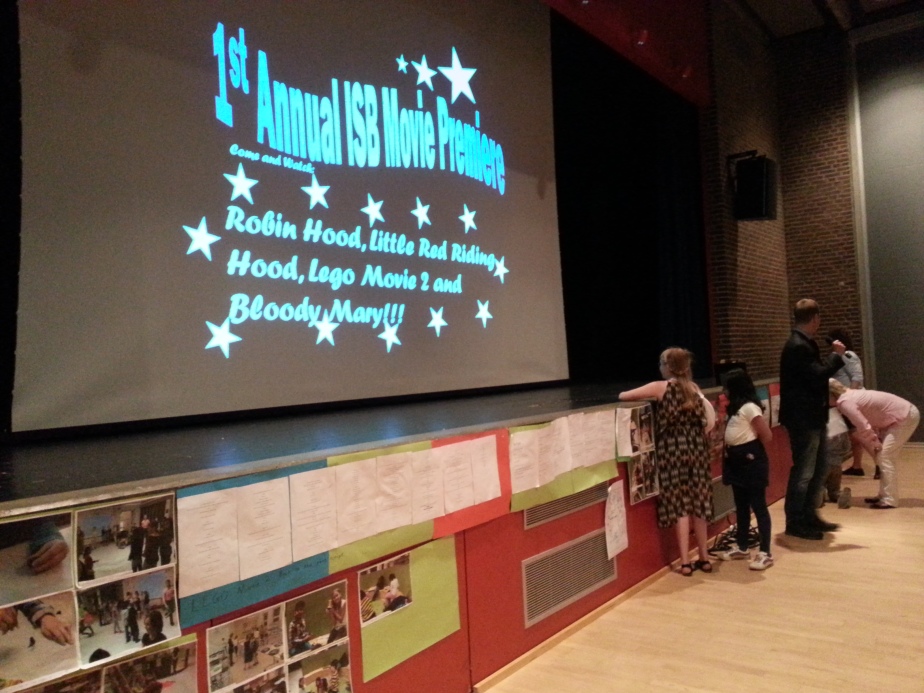 So there were 4 movies which were to be screened for the premiere and the winners for all categories were to be decided from them. The movies were Robin Hood, Bloody Mary, The Little Red Riding Hood, and The Lego Movie 2.

And the categories of winners were: Best Scriptwriter, Best Movie, Best Director, Best Editor, Best Actor, Best Actress, Best Cameraman, Best Sound, Best Costumes etc. Here are the awards that were to be given away to the best of the best. 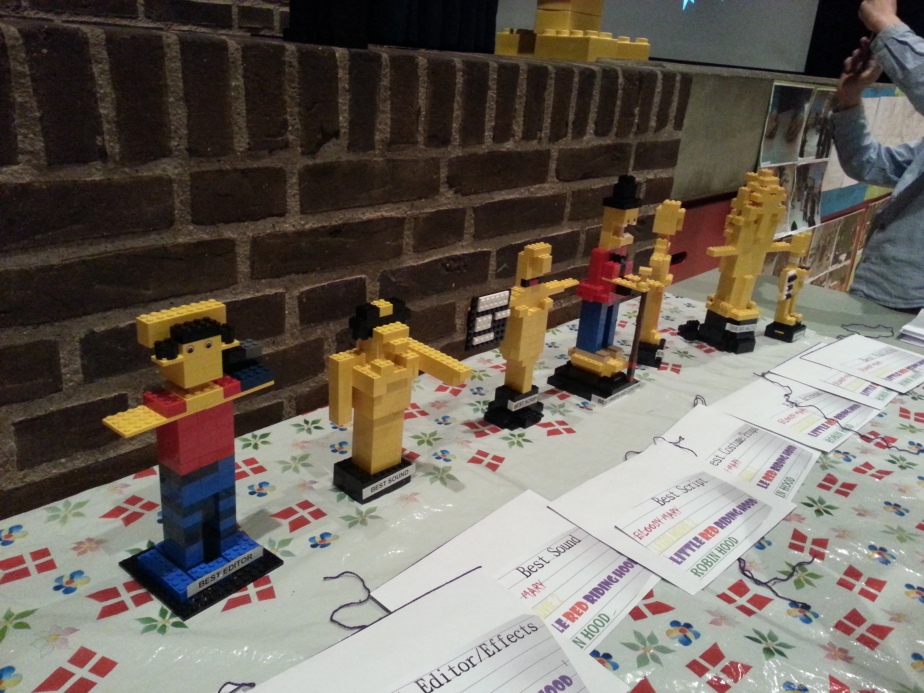 The children displayed some great levels of creativity, talent, motivation and enthusiasm in organizing this amazing show. All the movies were shot by the children of the Primary Section. They designed their own costumes, created the special effects, edited the videos. Even the awards were made by the children using different Lego Bricks.

The audience which included the parents were equally enthusiastic because am sure many including myself were attending a movie premiere followed by an awards ceremony for the first time in their lives; and all thanks to the wonderfully talented little kids.

So the movies were screened and the awards were given out. There were a bunch of enthusiastic kids and parents who walked out of the auditorium feeling fulfilled. 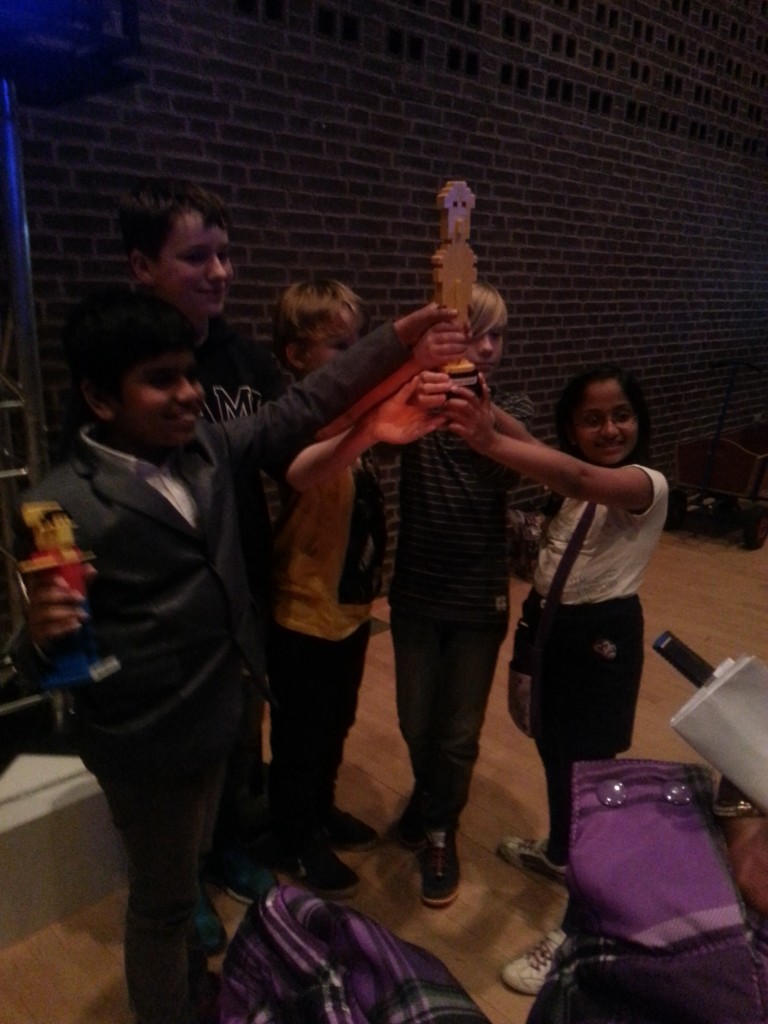 This was the first Annual Movie Premiere and Awards Ceremony of the ISB kids. Will be looking forward to more such amazing display of talent shows from these super talented kids. I wish we had such amazing exposure to the variety of opportunities that are being bestowed on today’s kids. But feeling extremely proud to be part of a team and school where kids are being given the opportunity and the scope for getting the best out of themselves. Kudos to team ISB and the wonderful kids.